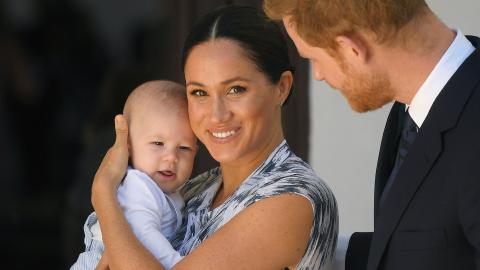 It seems like baby Archie was born just yesterday. Now royal fans can hear his voice for the first time on the Sussexes new podcast

Meghan Markle and Prince Harry rounded off their tumultuous year by announcing that they would be launching a podcast as part of their new deal with Spotify. The podcast recently kicked off with a holiday special, featuring a range of celebrities reflecting on the past year.

However, it wasn’t Elton John or Naomi Osaka that stole the hearts of audiences as little Archie also made a cameo where listeners got to hear the new Royal’s voice for the first time...And, it turns out he has a bit of an American accent.

The 19-month-old made a surprise appearance at the end of the episode where Harry can be heard telling his only son: ‘You can speak into [the mic]’. Meghan further prompted the toddler to speak by asking ‘Archie, is it fun?’, to which he responded ‘fun!’.

Harry can then be heard helping little Archie to wish the world a happy new year saying ‘After me. Ready? Happy’. The whole scene was adorable as Archie can be heard repeating ‘Happy...New...Year.’

Clearly stoked with his efforts the little angel ended his appearance with ‘BOOM!’ (queue the throwback to Archie and Queen Elizabeth’s infamous mic drop video of 2016).

Archie made his endearing appearance just after the couple broadcast the famous gospel song This Little Light of Mine, which also featured at the couple’s wedding. Speaking about the song, Meghan quoted Martin Luther King stating:

The music that we wanted playing when we started our lives together. Because as we all know, ‘darkness cannot drive out darkness, only light can do that.’

In reference to their milestone year, separating from the royal family, moving to America and starting their Archewell foundation, the couple gave a tidbit of advice for all their listeners:

From us I’ll say no matter what life throws at you guys, trust us when we say, love wins...Love always wins.

The couple also had a string of celebrity friends on the show who also reflected on their time including, Elton John, James Corden, Naomi Osaka and Deepak Chopra. The 73-year-old musician notably said in a message to his fans:

To check out little Archie’s cameo, listen below around the 31:55 mark!