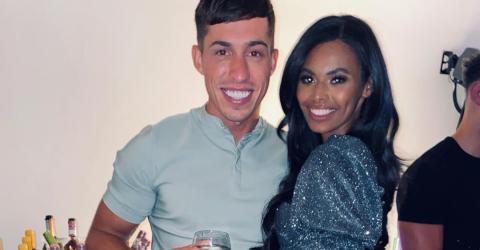 After leaving Love Island last week, 21-year-old Sophie Piper has finally spoken out about her relationship status with Connor Durman. Sophie and Connor were coupled up on the show until Connor was voted out by his fellow Islanders – and Sophie failed to follow him out of the villa…

Whilst the original Islanders still on the show were ripped apart by Casa Amor this week, Sophie Piper and Connor Durman were finally reunited after Sophie was dumped from the island a week after Connor. The pair saw each other for the first time on Monday’s Aftersun but have been spending time together ever since…

Appearing on Aftersun, the pair were all smiles as they got cosy on the couch and told how they only had eyes for each other in the villa. Connor admitted that it had been ‘hard’ watching Sophie on the show after he’d left but proved there were no hard feelings as he asked for her number live on air.

It looks like Connor and Sophie had their first official date outside the villa on Wednesday night – as they shared a Nando’s in a hotel whilst watching Love Island. However, despite having shared a bed whilst on the show, the budding couple claim they slept in separate rooms after finishing their meal.

Despite seeming pretty loved up, Sophie had revealed in a radio interview with Capital Xtra that she and Connor are ‘not together’. She laughed:

'No, we are not together at all! We are just seeing each other! It is a situation-ship. I'm just enjoying that. Obviously I’m still gonna get to know him, go on dates with him.’

What is a situation-ship?

Situationships are a millennial trend that has been around for a few years now where two people form a short-term romantic connection. Dating coach Samantha Burns describes it as:

‘like you’re playing house by pretending you’re in a relationship, but with no real consistency, dependency or reliability... It can be a confusing and nebulous time in the relationship, full of uncertainty about what you are and where it’s going.’