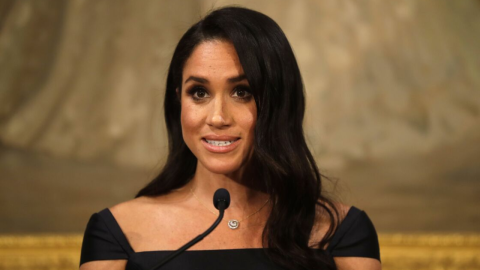 The Sussexes announced a new deal with Spotify last week. However, a survey shows that no one in the UK wants to listen to it.

Last week Meghan Markle and Prince Harry announced a collaboration with Spotify, where the two would be hosting a podcast on the platform through their new production company Archewell Audio.

However, despite promising to inspire listeners with diverse perspectives and stories, it seems that nobody in the UK wants to hear it.

A new survey held by YouGov showed that a majority of Britons had no desire to listen to the Duke and Duchess’ new podcast with 77% of participants responding they were ‘not interested at all’ in the audio series. A further 12% were a little less harsh, responding that they were ‘not very interested’.

However, despite the majority freezing out Meghan and Harry, 5% of respondents did claim to be ‘fairly interested’ in hearing the couple’s work with and a further 2% saying they were ‘very interested’. A further 4% stayed diplomatic responded to the survey saying that they ‘did not know’.

The news of the couple’s Spotify deal comes just months after the couple also signed a partnership with Netflix,reported to be worth more than £100 million. Prince Harry described the upcoming Podcast series with the streaming giant stating:

What we love about podcasting is that it reminds all of us to take a moment and to really listen, to connect to one another without distraction.

He continued to state that this year of all years has made it even more important to hear each other’s stories:

With the challenges of 2020, there has never been a more important time to do so, because when we hear each other, and hear each other's stories, we are reminded of how interconnected we all are.

The couple is set to release their first episode with Spotify in the coming weeks in the form of a ‘Holiday Special’.

But, sadly for Harry and Meghan, it looks like all their listeners will the tunning in from the US.