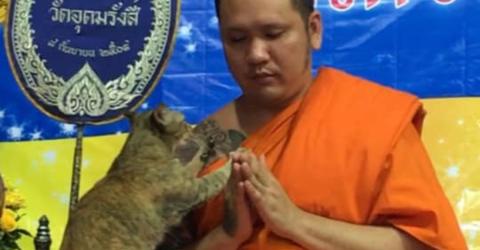 Inviting himself to a Buddhist ceremony, the feline has set his sights on a monk who can hardly not laugh

It's hard enough to not get overwhelmed by an adorable cat who comes to cuddle, and also how hard it is to keep your serious face when you're in a very important place meeting. If you mix these two situations it's just impossible to handle. This is what happened to a Buddhist monk when a cat approached him asking to be pet.

We know that monks are supposed to always stay impartial in every situation, we strongly sympathise with this Thai monk, who tries to stay focused during his prayer while the cutest cat came to disturb him. The scene took place during a Buddhist ceremony, for the New Year's Celebration, a few days ago.

The clip was posted on Facebook and has quickly gone viral, where you can see a monk gently trying to push the cat back while continuing his prayer. But the cat is persistent and will not give up until the monk gives a little love, stubbornly staying on the monk's knees until he gets what he came for.

The clip gets funnier as the more the monk ignores him, the more the cat insists and gets more and more intrusive by putting his front legs on his shoulders and going from one knee to another.

Getting tenacious this cat is not ready to let up until the religious man buckles and agrees to caress the feline while still praying, struggling to hold his laughter. The man can't hold it and smiles at the kitten to give us one of the cutest scenes to start off the year.

Check out the video to see a video that will brighten your day.