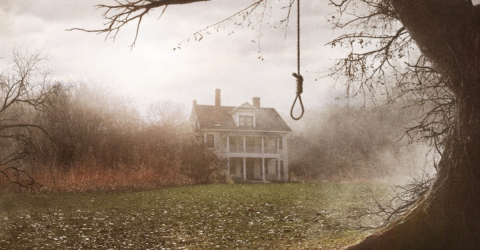 One daring couple bought—and now live—in the spooky house that influenced The Conjuring. And they reveal that the paranormal activity continues to haunt the house!

In the 2013 flick, The Conjuring, inspired by real-life events from the 1970s, two paranormal investigators aim to pinpoint the mysteries unfolding in one family’s farmhouse. It’s creepy, supernatural, and haunting. One of the paranormal experts, Lorraine Warren, reveals that it’s still tough for her to talk about those investigations today!

The paranormal investigators, Ed and Lorraine Warren, claim that an evil spirit called, Bathsheba Sherman lingers in the farmhouse. The Warrens reveal that this spirit caused supernatural havoc within the house and to anyone who resided on the property.

And the story may be even more realistic than we originally thought, making it even scarier to think about!

Corey Heinzen, a paranormal expert, found the haunted elements of the farmhouse intriguing, so he and his wife, Jennifer ended up buying the home! Corey lived in farmhouse alone while his wife and son packed up their former home. The paranormal investigator found out some pretty interesting things. Tune into our video to learn what he discovered!

#paranormal
Contact
To ensure that we can best respond to your question, please choose your desired department
No connection
Check your settings