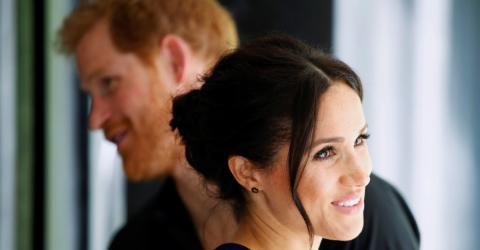 While they have been married since May 19, 2018, Meghan Markle and Prince Harry have just welcomed their first child - a baby boy!

The royal family has just grown! The Duchess of Sussex and Prince Harry have welcomed their first child just short of one year after their wedding that took place on May 19, 2018 - and it's a boy!

Prince Harry has now confirmed to the press that he and Meghan have welcomed a baby boy. Their son was born on 6th May 2019, weighing 7lb 3oz. A grinning Prince Harry told reporters that he is 'absolutely thrilled' at the birth of his son.

Meghan is believed to have given birth just before 5.30am this morning at their home Frogmore House, as planned, foregoing the royal tradition of giving birth at the Lindo Wing in Paddington.

Meghan and Harry's first child is seventh in line to the throne, after Charles, William, George, Charlotte, Louis and Harry himself.

A statement issued by Buckingham Palace confirmed: 'The Queen, the Duke of Edinburgh, the Prince of Wales, the Duchess of Cornwall, the Duke and Duchess of Cambridge, Lady Jane Fellowes, Lady Sarah McCorquodale and Earl Spencer have been informed and are delighted with the news.

The duchess's mother, Doria Ragland, who is overjoyed by the arrival of her first grandchild, is with their Royal Highnesses at Frogmore Cottage.'

Take a look at the video above for all the details we have so far - including when the baby will make his first public appearance!