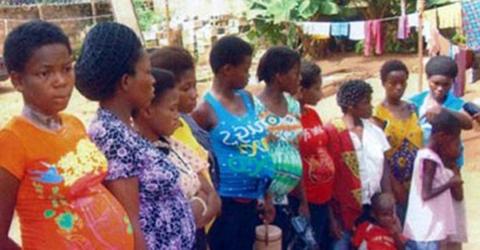 A few days ago, police officers raided a huge "baby factory," where nineteen young women and girls were preparing to give birth. But what exactly are these "baby factories?" Allow us to explain.

In Lagos, Nigeria, police rescued nineteen pregnant women and girls, most of them aged 15 to 28, and four infants from a "baby factory." "Some (of the women) were tricked with employment as domestic staff in Lagos," said Nigerian police spokesman Bala Elkana. He added: "others knew exactly what they were coming for and were hoping to make money. "

What is a "baby factory?"

Yes, it's actually what it sounds like. A place, often a private home or hotel, where pregnant women's children are taken away from them. While some of them do it voluntarily to make money, others were abducted and, in some cases, raped in the baby factory to "produce" babies. Given the dehumanizing nature of this illegal enterprise, the word "factory" is quite fitting.

In Nigeria, human trafficking is the third most widespread and lucrative crime after fraud and drug trafficking, according to a TV5 World survey. Every day, ten newborns are sold across the country or sent to Europe or the United States. These infants, who are often adopted illegally, dodged a bullet: slavery, ritual crimes.

How can they be stopped?

Even if they're under the age of 12, girls are considered potential surrogates by some traffickers, Ifeoma Ihionu, lawyer and project manager of the nonprofit CRACO explained to TV5. So, to stop these "baby factories," as they are nicknamed in Nigeria, child protection services issue accreditations to legitimize them as care facilities. (*)

The babies are sold for 300 000 nairas (760 euros), if it's a girl, or 500 000 (1265 euros) for a boy, according to Le Parisien. This black market for human beings needs to be stopped, and Nigerian authorities are striving to do so. "It's not just about the rights of the baby or the child that's sold, which is prohibited by law. We also have to consider the rights of the teenager or the young woman who is forced into becoming a baby-making machine," says the lawyer.

Below, we'll tell you about a Daily Beast reporter's investigation into a network of baby factories.

#nigeria
Contact
To ensure that we can best respond to your question, please choose your desired department
No connection
Check your settings