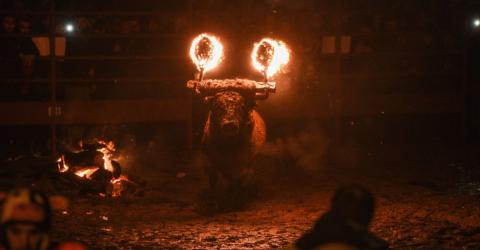 Every year during the second weekend in November, a cruel tradition takes place in Spain. During the festival known as ‘Toro Jubilo’ or ‘Toro de Fuego’, live bulls are set alight.

It’s unbelievable that a tradition as cruel as this is still allowed to go on. Even in 2019 in the town of Medinaceli, the cruellest of all animal cruelties took place during a tradition as old as they come. During a bullfighting event, the animals’ horns were set alight.

Horns coated in a flammable material

The bull is fully conscious when their horns are coated with some kind of flammable material. Although the bull is also covered in a layer of mud, this offers little to no protection against the heat from the flames. Once the animal is set alight, it is released from the arena where it runs panicked through the streets trying to extinguish the flames. Unfortunately, due to the nature of the material that is burning on the horns, this isn’t so easy.

The bulls run into streetlamps and the walls of buildings and houses. Some animals survive this ordeal but are then forced to live with injuries that they sustain from the burns. In addition, because the horns are so close to their faces, many bulls also end up with burns on their eyes.

Although this tradition is very cruel and encourages torture for the animals, lots of people nevertheless continue to attend these events. They call it the ‘Toro de Fuego’ or ‘Fire bull’ in English and animal rights activists have been trying to get this cruel tradition banned for years, although so far without success. Even today, they haven’t been able to do anything about it, but they continue to fight against this type of animal cruelty and suffering. But unfortunately, bulls aren’t the only animals that are forced to suffer at the hands of humans.

If you want to do your part in the fight against animal cruelty, you can sign this petition created by PETA. Of course, it would be even better if you just steered clear of cities where events and festivals such as this take place and not travel there at all. Maybe, as a result, the organisers might finally realise the cruel reality of what they are doing to their animals.

The video below was taken during 2011 and in it, you can see what continues to happen in some places even today and witness for yourself how their horns are set on fire. But be warned, the content in the video is not for the faint-hearted and may be distressing for some viewers!

#crime#bsa
Contact
To ensure that we can best respond to your question, please choose your desired department
No connection
Check your settings