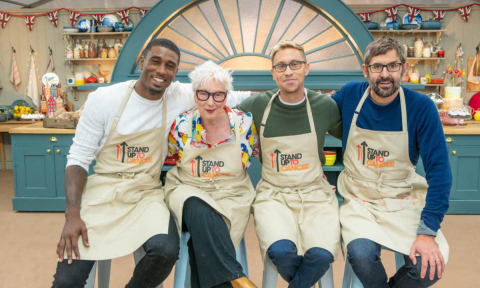 Louis Theroux, a documentary maker, got quite competitive in this episode and made Great British Bake Off History after the initial challenge where the contestants were all instructed to make a giant cookie.

Theroux knocked it out of the park with a pizza inspired masterpiece with a chocolate chip cookie base, raspberry icing for the 'tomato sauce', shredded white chocolate 'cheese' and dark chocolate drop 'olives'. It's easy to see why Theroux was pretty smug with his creation.

Upon judgement, Theroux received three handshakes, one from each of his critics, Paul Hollywood, Prue Leith and Noel Fielding. A big deal to say the least:

‘I got three handshakes! That’s never happened before on Bake Off,’

However, Theroux did cheat on this endeavour a little bit as he was the one who took Prue's hand:

Feilding was on Prue's side of the ordeal and admitted that his handshake also meant nothing. Nevertheless, this is still a win for Theroux.

Handshakes are a coveted thing in Great British Bake off but they didn't start to become a thing until the third season of the show but it's safe to say that now everybody wants to shake hands with Paul Hollywood.

The millefeuille was the final challenge and the Weird Weekends mastermind did not come out on top. A competitive Jenny Eclair ended up taking the win of the episode, with poor Russell Howard coming in last after having a bit of a hard time.

Exhaustion and pressure took its toll on Howard in the episode, reducing him to tears, he even compared the intensity of the competition to Guantanamo Bay:

‘But I mean, I did badly… like I came home and, no word of a lie, sat down on the toilet and I cried like a drunken, broken Elvis. It was like Guantanamo Bay! Honestly, it was so difficult, These people come up to you and they say make a cake and I don’t know how to do that. And then you spend two and a half hours trying to make a cake. And then you present it to these experts.’

Howard's burn out is understandable though as the comedian has just finished his UK tour, completing 20 shows in 22 days. That's hardly any time to rest.