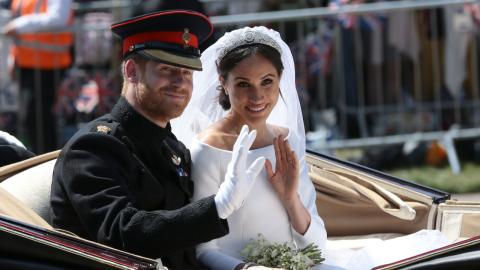 Palace 'forgot' to wish Harry and Meghan on third-year anniversary

Yesterday was Prince Harry and Meghan Markle's third-year wedding anniversary and all royal family social media accounts were silent on the occasion.

On 19 May 2018, Prince Harry and Meghan Marklehad a spectacular wedding at St. George’s Chapel in Windsor. It's been three years since the joyous occasion, but it looks like the royal family is not celebrating with them anymore.

The royal family always uses their social media accounts to mark special events, but this year they forgot to wish Harry and Meghan on their anniversary. On the very same day, they used their accounts to announce that a royal baby was joining the family. While many believe that it doesn’t mean anything, some wonder if it was a deliberate move byBuckingham Palace. Royal expert, Duncan Larcombe told OK! Magazine:

It's a bizarre decision by the palace to have a clash as the royal diary is meticulously planned out and births, deaths and marriages have a lot of consideration and planning with the announcements. Palace officials will take into consideration the news and what is being talked about.

This is no mistake. The fact that they decided to announce Princess Beatrice's baby news on the same day as Prince Harry and Meghan Markle's anniversary seems to say something. I'm not saying it's the palace waging a war but it seems to show that the couple are certainly irrelevant to them in terms of diary clashes.

Regardless of whether it was intentional or not, Prince Harry and Meghan seem to be unfazed by their silence.

This year, the royal couple has decided to celebrate their milestone by helping those in need—and that comes as no surprise. As the whole world’s attention has been on India’s COVID crisis, Harry and Meghan announced that they will be building a community relief centre in Mumbai. The couple has partnered up with World Central Kitchen to support local communities by providing a multi-purpose relief centre which can be used as a vaccination centre, an emergency-response kitchen, or even a school when things have calmed down. They shared in a statement on the Archewell Foundation website:

Right now, COVID-19 cases are spiking across the entire country of India. On Tuesday, India’s total virus cases exceeded 25 million, with 260,000 new cases and 4,329 deaths reported in the past 24 hours. Hundreds of thousands of lives have been lost, millions have been infected, and there is widespread concern that the crisis is even worse than reported.

In support of India, Archewell Foundation and World Central Kitchen are focusing on the long-term needs of local communities.