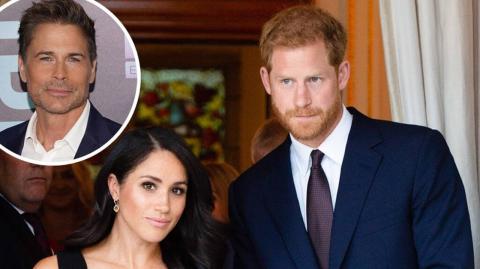 Meghan and Harry's celebrity neighbour no longer holds back criticism

The Sussexes' move to their new neighbourhood in Montecito has not pleased everyone, starting with their neighbour Rob Lowe.

Rob Lowe could have done without Meghan and Harry's arrival in his neighbourhood! In an interview with E! News, the American actor quipped about the Sussexes' move to Montecito, a chic neighbourhood in Los Angeles where he took up residence several years ago.

The grandmother bullmoose of all mixed bags

After living for several months in a luxurious Beverly Hills villa lent by Tyler Perry, the Sussex couple have finally invested in a sumptuous mansion in Montecito, a district of Santa Barbara. A magnificent residence of 1,700 square meters, worth 15 million dollars, which includes nine bedrooms, a lift, a spa, a gym, a swimming pool, a tennis court, a cinema room and even a large chicken coop.

While the Sussexes are delighted with the acquisition, Rob Lowe lamented that his neighbourhood was so peaceful before his two famous neighbours arrived with all the usual clamour they can't seem to give up on. He quipped:

They've clearly drawn eyes to my quiet little town. Let me tell you, when royals move into your neighbourhood, the neighbourhood will never be the same. Now that they're here, the good news is that our property is worth more, and the bad news is that the line is longer at Starbucks.

The Sussexes security in jeopardy?

Prince Harry and Meghan Markle may be living their lives on their own terms, but they have encountered many setbacks since moving to Los Angeles. Their main worry is for their safety, as their Montecito mansion has already been invaded twice. A 37-year-old man named Nickolas Brooks was caught twice trying to break into their home, before being arrested by Santa Barbara County Sheriff's officers.

For more information about the Sussexes sunny Californian life, check out the video above.