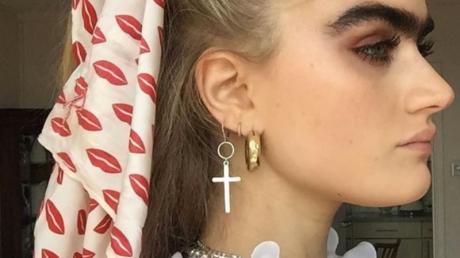 Her career as a model has broken lots of beauty barriers. However, one aspect of her appearance seems to offend some people quite a lot, so much so in fact that she has even received death threats.

We could say that Sophia Hadjipanteli’s story is that she’s a 22-year-old girl who isn’t scared to show off her eyebrows. But that’s not fair to say. Sophia’s story goes much deeper than a mere depilatory statement.

This student originally from Cyprus is the main character of a story about how to deal with and face absurd social norms that say you’re not beautiful, establishing a framework in which anyone who doesn’t follow the trends is automatically oppressed.

And this isn’t just traditional oppression. Sophia has also had to suffer for being a daughter of immigrants or always dressing differently. This is the terrifying phenomenon that occurs when harassment crosses paths with the oldest form of machismo, leading to a dangerous result: that individuals with not much intelligence get so offended by a few hairs think that justifies sending death threats to a 22-year-old girl because they don’t like her eyebrows.

Sophia confessed in a British TV program that she has often been a victim of death threats on social media. However, none of this has been an obstacle for her during her impressive career to deconstruct the beauty stereotypes that oppress us.

Her courage is worthy of a lot of praise, and despite everything, she doesn’t seem willing to budge an inch for those who want to bring her down with their criticism. And as you can see in the video above, whilst she gets death threats, Sophia still posts lovely photos of her beauty on social media sites.

Check out the video above to see more from the gorgeous Sophia!