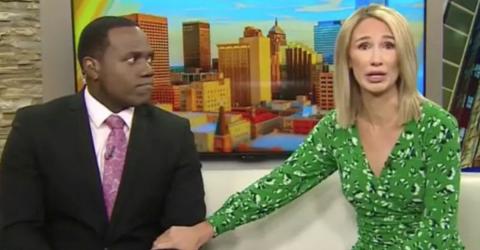 A female presenter on a local American TV channel created quite the controversy when she compared her co-anchor, a black man, to a gorilla while they were on air. She then made a public apology the next day.

This scene recently created quite a lot of outrage in the United States. Last week, while on air on the local TV show KOCO in Oklahoma City, a female presenter compared her co-anchor, a black man, to a gorilla, who had just appeared on the show.

‘He kind of looks like you when you take a picture’

At the end of a report dedicated to Fin, the baby gorilla in question, which was being broadcasted, giving viewers the opportunity to see the little animal playing with a camera in selfie mode, Alex Housden turned to her partner on air, Jason Hackett, and said he ‘kind of looks like you when you take a picture’, as NBC News reported on Tuesday 27th August.

And her colleague reported to this remark quite humorously: ‘Yeah, he kind of does actually.’ Although this exchange might seem innocent at first, the fact that this was a white female presenter comparing her black co-host to a gorilla sparked a wave of outrage and anger on social media sites.

Several complaints and an apology made on air

In light of the several complaints that the channel received because of this, Alex Housden apologised for what she said on air the next day, sobbing and gripping her colleague’s arm.

‘I said something yesterday that was inconsiderate, it was inappropriate, and I hurt people. And I want you to know I understand how much I hurt you out there and how much I hurt you,’ she said to the camera before turning to Jason Hackett next to her, adding that he had been one of her ‘best friends for the past year and a half.’

After accepting her apologies, her co-anchor highlighted that ignorance is no excuse.

We bet this advice would largely benefit a certain Donald Trump who recently made some quite violent and incendiary remarks about a black elected official in Baltimore.

#viral#stories
Contact
To ensure that we can best respond to your question, please choose your desired department
No connection
Check your settings