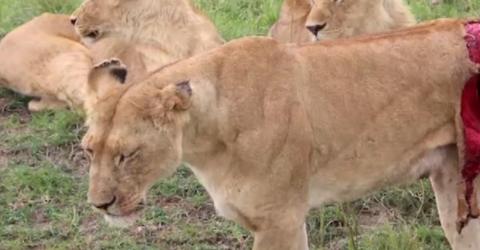 WARNING: This video contains graphic images. A seriously injured lioness was saved just in the nick of time by vets of the David Sheldrick Wildlife Trust. In April this year, the vets were called to the Maasai Mara Kenyan National Reserve to perform a delicate operation on the female lion.

The lioness named Siena had received a large and bleeding wound above her right back paw after being seriously injured by a buffalo. Even though these huge felines are without a doubt the Kings of the Savannah, some buffaloes won’t hesitate to fight back when they are attacked or when one of them is in danger. A buffalo has even recently been filmed roughing a lion up badly.

Vets to the Rescue

The members of David Sheldrick Wildlife Trust were the first on the scene to treat the lion’s serious wound. They were alarmed by her injuries and quickly contacted Doctor Njoroge from the Kenya Wildlife Service. The vet and his team then arrived from Nairobi on a small plane to come to the rescue of this female, aged 11, who had just given birth to three cubs.

The team approached the lion in a car to sedate her, but a few minutes after they gave her the tranquilliser, another young lion approached. Siena, who was still on her feet, became a bit concerned about the other lion, even though it seemed like it was just trying to remove the tranquilliser dart, a bit like it had been trained to do so.

Luckily, the sedative had time to take effect and Siena gently went to sleep whilst the rest of the tribe was kept out of the way, explains the David Sheldrick Wildlife Trust website.

They began treating the lioness at 15.30 and the operation lasted almost an hour and a half because the wound was quite large and Siena’s soft tissue was damaged as well as her skin. The vet therefore had to clean the wound with a saline solution before stitching it back up.

Before letting the feline back into the wild, doctors applied an antibiotic spray that was a strange blue colour and then covered the stitches with a thick ointment. The ointment, made of green clay, allowed the process to accelerate the healing process, so that Siena could get back to normal as soon as possible.

At the same time, long-lasting antibiotics were injected into her to avoid the wound getting infected, says Discovery News. The treatment, which was dubbed as a “big success”, has allowed the lioness to quickly rejoin her pride and her three cubs.

Lions are considered the Kings of the Savannah; however they are not safe from danger and getting injured. But despite their claws and huge teeth, they can also suffer from attacks from other animals. As a general rule, lions hunt antelopes, zebras, wildebeests, buffaloes and other animals in the Savannah. However, their prey are often larger and faster than the lions, hence why they have adapted to hunting in packs.

But there is also a risk that one of these animals will attack back; especially buffaloes which are one of lions’ ancestral enemies. Admittedly, felines can end up waiting for hours for one unlucky buffalo to stray away from the group. But these cattle are not only capable of stopping a lion attack, but can also inflict some serious damage with their horns.

Furthermore, buffaloes have a lot more endurance than lions, even if they aren’t as fast and in the long run, a buffalo can often escape or outshine a lion.

#lion
Contact
To ensure that we can best respond to your question, please choose your desired department
No connection
Check your settings