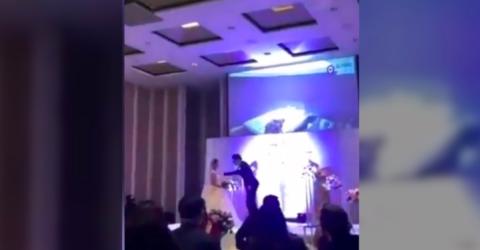 A video taken at this wedding has recently gone viral, and all because the fiancé waited until the day of the ceremony to reveal that his wife had been unfaithful. But the worst part was who she was cheating on her future husband with.

A video taken at this couple’s wedding has recently gone viral and not because the couple threw cake in each other’s faces like lots of couples do. In fact, what happened is actually quite the opposite and they didn’t even make it to the feast.

Not long before their wedding, the man discovered that his fiancée was cheating on him. Instead of confronting her, however, he decided to go ahead with the ceremony and give her what she deserved just before she said ‘yes’. And lots of people have said that he violated the young girl’s rights by doing so.

It all went down during the ceremony. The couple were originally from China and the future husband decided to wait until their wedding day to reveal, in front of everyone, what his future wife had been up to.

Just before declaring them husband and wife, a video was projected and at first, the video was so lovely that even the audience applauded.

When the intimate part of the video started, the man pushed the young woman and lots of guests had to intervene to separate them.

Check out the video above to see the footage of what happened at the ceremony.