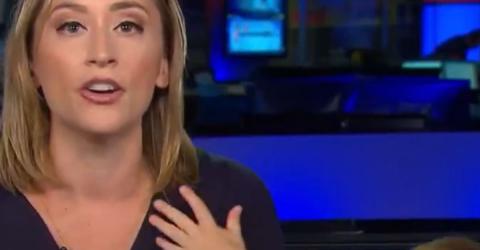 She was reporting on the attacks on Kurdish militia at the Syrian border when a little intruder interrupted her live broadcast... The journalist, Courtney Kube tried to gently shoo him away...

An unexpected guest made an appearance last Wednesday on the American channel MSNBC's live news broadcast. Pentagon reporter Courtney Kube was reporting on the Turkey-Syria airstrikes against the Kurdish militia - a very serious and tragic event - when her son, who could barely reach over the table, casually wandered into the shot, reaching his arms up towards her.

"Excuse me, my kids are here... live television." The journalist, who couldn't help but smile, apologized and tried to shoo her son away.

Fortunately, she managed to regain control of the situation while her team cut to an explanatory map of the area between Turkey, Syria, and Iraq.

The TV set was hidden and her son was probably removed from it. No time for a transition - Courtney Kube continued on with her live report.

The clip of the mishap, which amused Internet users and TV viewers, quickly went viral. "That was the sweetest thing I’ve seen in a while. We need to see things like that in this period of awful and serious news," said one Twitter user.

Others recalled the hilarious clip of expert Robert Kelly, who was interrupted by his two children while he was reporting live on the BBC in 2017. After 30 long and embarrassing seconds, his wife burst into the room and tried, in vain, to quietly get them out of the room...

Watch As Squirrel Gets Drunk From Eating Too Many Fermented Apples

#funny
Contact
To ensure that we can best respond to your question, please choose your desired department
No connection
Check your settings