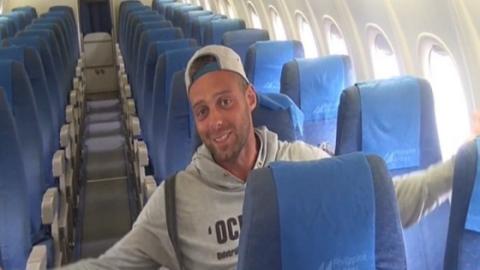 Alex Simon, a 28-year-old Austrian, will remember his Philippine Airlines flight from Manila to Boracay for the rest of his life, and for good reason; he was the only passenger on the plane! He had two flight attendants and two pilots all to himself.

Alex Simon did not have to worry about the noise of other travellers since he was the only passenger on his flight. The travel blogger was quite surprised when he realised that no one else was boarding the plane.

Only one passenger on board

When he arrived at the airport, Alex heard a hostess at the microphone call his name, asking him to come to inquire about his flight.

She then explained that his departure was moved ahead of schedule and that he had to wait only 30 minutes instead of the 2 hours he originally expected. All this because he was the only passenger expected.

He explained why he had this privilege: ‘I was pretty surprised and I could not believe it, I thought I was dreaming. After boarding, I realised this would be a special flight because this time I did not have to wait in line.’ When he boarded, Alex was able to choose any seat he wanted.

Photos of his flight

Alex published photos with the crew on his flight. He even went to the cockpit to take a picture with the pilots. He also made a video that went viral very quickly. He can be seen marvelling at the magnificent landscape and comparing it to heaven.