This super cute puppy was born with just one eye and a monkey-like snout. His unique look prompted his owners to name him Kevin after the Minion from Despicable Me.

Kevin, the one-eyed dog, was born in Chachoengsao, Thailand. His sibling looks like a regular puppy, but Kevin has a unique look—he resembles a cyclops!

What’s his mum’s breed? Well, she’s an Aspin. But no one knows the breed of Kevin’s dad, so we have no way of figuring out why Kevin was born with one eye and a monkey-looking snout.

Unfortunately, Kevin can’t feed off of his mum, so his owners, Somjai Phummaman and Amphan have to bottle feed the tiny, adorable puppy. After two days of life, Kevin is doing really well, but it may not last.

While most Aspin’s live until 14-years-old, poor Kevin may not even last a week! The vet informed the owners that the one-eyed pup’s snout may hinder his ability to survive more than a week.

Somjai, one of the owners, said:

'We are wishing that the puppy survives, even though it has a deformity. We want to keep him as a pet until he grows up.'

Parn, Somjai’s daughter, also talked about the fascinating situation: 'We have taken good care of the puppy so far.' She continued by saying, 'He cannot be breastfed the proper way, so we have to hand feed him with the milk bottle.'

We hope Kevin stays alive for a long time! And it looks like the owners will do whatever they can to care for the little pup, especially since their neighbours consider him to be a lucky sign! Want to see more photos of Kevin? Take a look at our video! 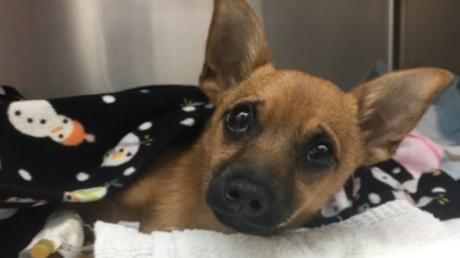 This Dog Accidentally Swallowed A Bag Of Drugs... Here's What He Looks Like Today