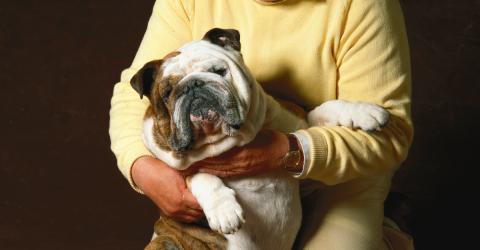 We've all heard it before: dogs are man's best friend. And according to scientists, there's more to this saying than you think. Here’s what you need to know.

According to a study from the University of Copenhagen that was published in the scientific journal Preventive Veterinary Medicine, overweight pet owners are more likely to have dogs that weight above average. Man's best friend has a 35% chance of being overweight if their owner is overweight. Their chances of being overweight drop to 14% when the owner isn't overweight.

How to explain this difference?

According to the main author of the study, Charlotte Bjørnvad, who is a veterinarian and professor at the University of Copenhagen, it all boils down to the treats we enjoy feeding our four-legged friends. Overweight people tend to give their pets more treats, while others use treats for "educational" purposes.

"For example, when a person is relaxing on the couch and shares the last bites of a sandwich or a cookie with their dog," explains Charlotte Bjørnvad. However, this habit of sharing meals with your pet isn't may not be good for their health. Considering that 34% to 59% of dogs are overweight in Western countries, this behavior has very real consequences.

In fact, an overweight dog may have a shorter life expectancy than a dog with a healthier weight. They are more likely to develop heart disease or become diabetic. Veterinarians estimate that a dog that is too big will die 1 year and 3 months earlier than a dog with a normal weight.

According to pet website Wamiz, "Obesity increases the risk of cancer by 50% according to a recent study conducted by veterinarians. Obesity also causes vascular accidents and difficulty breathing. Being overweight can also result in joint problems."

Neutered males are at increased risk because, according to the study, "castration seems to decrease the ability to regulate the appetite in male dogs and at the same time, it might also decrease the incentive to exercise which results in an increased risk of becoming overweight."