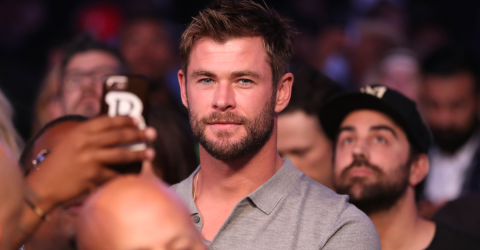 Chris Hemsworth is one of Hollywood's most prominent actors. After his roles as Thor in the Marvel Cinematic Universe and in Ghostbusters, he is now starring in the latest Men in Black alongside Tessa Thompson.

Chris Hemsworth is all smiles after the global success of Avengers: Endgame took him to the top, so he managed to get a role in the very famous Men in Black saga.

However, if we thought that the acting life is full of happiness, this is not really the case for the 35-year-old father.

Chris Hemsworth has decided to put his career on hold

After 12 months of loyal service on the set of the world's biggest box-office hit, the actor decided to put his career on hold. The time away from his family allowed him to understand what he wanted and what he didn't.

One thing is certain: the devoted dad no longer wants to leave his children and his wife behind. Married for 9 years now to Elsa Pataky, the lovebirds live in Byron Bay, Australia, with their 3 children.

The man best known as Thor said in an interview with GQ: ‘This year I probably won’t shoot anything. I just want to be home with my children.’

It is with great emotion and humility that the young Australian decided to hang up his superhero cape and devote himself to the only real role of his life: being a father.

#film#tv#celebrity
Contact
To ensure that we can best respond to your question, please choose your desired department
No connection
Check your settings