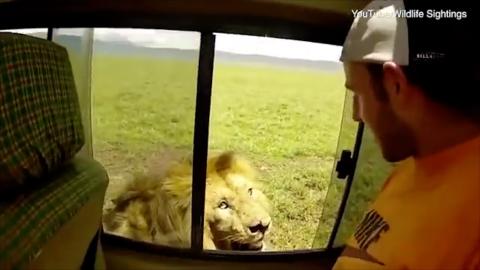 Videos of people doing stupid things constantly pop up on the Internet and across social media. But this video in particular is causing quite a stir online, after a tourist did the unthinkable whilst on a safari.

Well, this was a stupid idea indeed. In Tanzania, a man wanted to pet a lion during a safari. The clip, which was filmed in the National Park in Serengeti in Tanzania, has received more than a million views since being published.

An Incredibly Stupid Thing to Do

A man wanted to touch a lion during a safari and in one video published on YouTube, we can see him stick his arm out of the window of the vehicle and touch the back of a lion.

At first, the animal didn’t seem to react, but eventually, the lion became aggressive and after this happened, the man quickly pulled his hand back inside the car.

The safari director, contacted by TheSun, said that “the lion could have torn off the arm of the person trying to touch it.” He then added that “They were lucky to get away with it. They are wild animals.” He didn’t hold back about the stupidity of the passengers in the vehicle and said that they had been “incredibly stupid”.

Word to the wise... If you're ever on safari in Africa, do not try to pet the wild animals. They are extremely dangerous, and ferocious animals and should be treated with respectful caution.

#lion
Contact
To ensure that we can best respond to your question, please choose your desired department
No connection
Check your settings