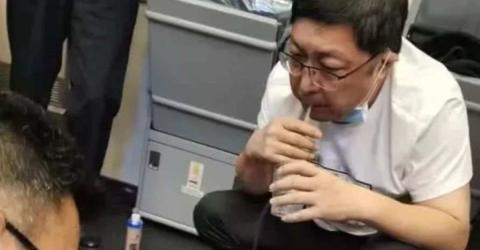 Two surgeons from China had to act fast to save a man’s life on a flight from China to New York. The man had around one litre of urine to sitting inside his bladder, causing him to go into shock.

Chinese doctors to the rescue! One elderly man, previously diagnosed with an enlarged prostate, almost lost his life on a flight from China to New York. Doctors improvise with tape and oxygen mask tubing to make device to save patient on plane from Guangzhou to New York.

10 hours into the flight, medical responders Xiao Zhanxiang, a surgeon at Hainan Provincial People’s Hospital, and Zhang Hong, a doctor at First Affiliated Hospital of Jinan University, came to save the day!

When the doctors arrived, they saw that the man was in shock. They speculated that the patient had around one litre of urine trapped within. And with six hours left in the flight, the doctors had to act fast.

'If we had not dealt with the situation in time, the patient’s life would have been at risk,' Zhang was quoted as saying.

They had no choice but to make use of makeshift, in-flight products to siphon the urine from the man’s bladder. Zhang said:

'If we had not dealt with the situation in time, the patient’s life would have been at risk.When I saw that the man could hardly bear the pain any more, my only thought was how to get the urine out of his bladder,'