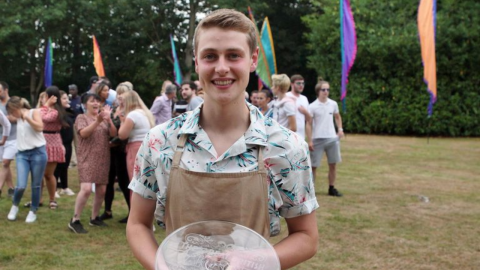 After 10 weeks, 30 challenges and 12 contestants, the Great British Bake Off has been able to crown their winner for 2020

We’re sure you must have watched the finale but we’ll tell you about it anyway.

Tuesday night’s episode of the Great British Bake Off brought us to the finale where Laura Aldington, Peter Sawkins and Dave Friday battled it out for the winning title of ultimate Star Baker.

And, after a tense three rounds, Peter won the judges over and became the youngest ever winner in GBBO history.

What were the final challenges?

For the final challenge, contestants were required to make the perfect custard slice.

Unfortunately for Laura, her custard didn’t set properly and the baker came to her teary end in front of the judges.

Meanwhile, Hollywood accused Peter of making his custard a little too thick but both he and Prue admitted it had a beautiful flavour.

In the technical challenge, Paul asked the contestants for a batch of walnut whirls.

Laura was this time let down by her timing which left her with melted chocolate and despite Peter’s best efforts, it was Dave who came in first place.

The showstopper challenge was probably the best of the season, as the remaining contestants were required to think long and hard about their time in the tent and create a dessert that reflected their GBBO experience… And, the creation had to sport three different baking disciplines.

Laura’s creation had great flavour but this time she was once again let down by disappointing presentation.

In the end, it all came down to Peter and Dave who both whipped up perfect sponge cakes, making the judges’ job that much harder.

But, after considering who did the best with their overall bakes, it was Peter who emerged victorious.

After being crowned the ultimate Star Baker Peter spoke about his experience:

I wanted this a lot. When I was 12, I was watching repeats of Bake Off back to back, and it got me into baking big time. I am a Bake Off nerd, and I think 12-year-old Peter would be in awe, and just the most excited giddy kid. I am that excited giddy kid right now.

Peter then went on to thank Laura and Dave for their support as well as hosts Noel Fielding andMatt Lucasadmitting that they always brought a fun atmosphere:

They kept it very light and would also give really good reassurance in a controlled and kind way, when they knew you wanted a bit of warmth and support, along with the mad stuff.

When Noel called me the babyface assassin and also said Paul knows that the Apprentice takes over from the Master – it was quite a funny nickname to be given but I wouldn't expect anything less wacky from Noel. And I promise you I didn't kill the Master at the end of the series.

When speaking about the judges, the young winner claimed they ‘came across exactly as you imagine them to be’.

I wanted to impress them both the same, and I wanted them to enjoy what I had made and to make them happy. When they were disappointed you felt it, particularly if you felt you had let Prue down. They both wanted us to do so well and were really encouraging us to make the best bake we could.

The freshly crowned baker also admitted that the show pushed him to be a little more adventurous in the kitchen.

I was quite adventurous before. But now I am less nervous of stepping out of my baking comfort zone. I tried to take on board the Judges' comments and learn about baking, be analytical about it and I feel I have learned about baking on a deeper level.

The tent isn't just about baking good bakes, it's about creating the perfect version of anything you bake.

Fans all over Twitter also posted to congratulate Peter: