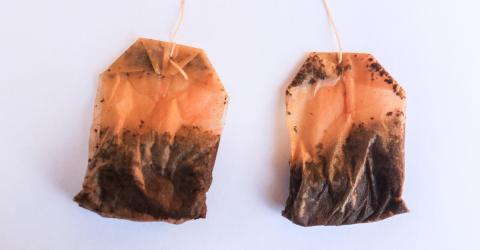 Bad news: teabags contain more than just theine. Scientists have discovered that they also release billions of microplastics into your tea.

Plastic is everywhere. It sticks around for decades, polluting our oceans, land, and even the air. Researchers at McGill University in Canada have also recently found a surprising amount of it in our teabags. Their findings were published in the journal Environmental Science & Technology.

The research team says that they used tea from four unspecified brands sold in supermarkets, all of them packaged in plastic teabags. As the scientists pointed out, some manufacturers use bags that are made out of natural materials, but many of them still contain plastic to seal the bag. Those are the teabags the scientists set out to investigate.

After removing the leaves from their bags, washing them and letting them sit in 95° C water for a few minutes, the scientists analysed their composition.

And much to their surprise: "Steeping a single plastic teabag at brewing temperature releases approximately 11.6 billion microplastics and 3.1 billion nanoplastics into a single cup of the beverage." To be more precise, it sheds particles of nylon and polyethylene terephthalate.

For now, the World Health Organization is unable to say whether this plastic poses a threat to our health. But more research is needed to assess this risk, especially considering that plastic has become an integral part of our society and lifestyle.