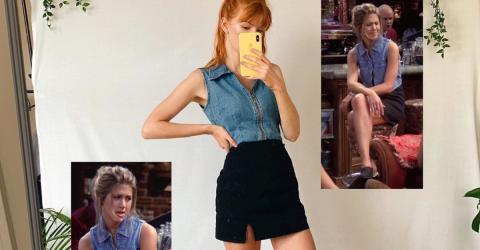 Most would argue that Friends is one of the greatest sitcoms ever created: it’s hilarious, it brings nostalgia, it continues to thrive despite ending in 2004, and now, the outfits worn on the show are influencing pop-culture fashion.

Rachel Green AKA Jennifer Aniston may have been the fashionista on Friends, but fans of the show have proven that they know a thing or two about style, too. That’s right. Fans are getting very creative when it comes to re-styling outfits from Friends!

But that’s not all that’s making headlines these days! Currently, fans are in a frenzy over Netflix removing the popular sitcom from its platform on January 1st.

The worst part? HBO Max hasn’t even launched yet, so fans will have to wait months before they can let Friends ease them to sleep, play in the background, or provide comfort somehow, someway.

When Netflix made the announcement, they wrote: 'We’re sorry to see Friends go to Warner's [streaming] service at the beginning of 2020 (in The US). Thanks for the memories, gang.'

The devastating news has prompted fans to threaten to cancel their Netflix subscriptions. One commented, 'I will cancel my subscription from Netflix If you stop streaming friends'.

Yikes. It looks like Netflix may be losing some subscribers. Anyways, maybe looking at Friends-inspired outfits will help to cheer heartbroken fans up! Take a look at our video to see two Instagrammers recreate outfits both Chandler Bing and Rachel wore on the show.

#fashion
Contact
To ensure that we can best respond to your question, please choose your desired department
No connection
Check your settings