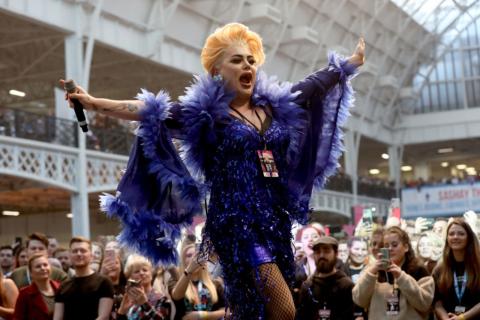 Since coming in third on the first edition of RuPaul's Drag Race UK, fan favourite Baga Chipz has dominated the local drag scene. Her next move? Conquering British television.

Although it was a bittersweet end to her journey on Drag Race, Baga Chipz has been killing the game ever since! The Midlands-born performer has done everything from touring the UK to appearing in countless British television shows including The Big Fat Quiz of the Year, Roast Battle UK, Pointless Celebrities and Celebrity MasterChef (for which she was particularly hilarious in!).

As if that wasn't enough to secure super stardom status, she also created her own spin-off series with season one winner The Vivienne called Morning T&T in which the funny duo parody Good Morning Britain dressed in their Snatch Game-winning characters: Margaret Thatcher and Donald Trump.

Although her accomplishments have been incredible so far, Baga admits that her 2020 schedule was suppose to see her travelling all throughout Europe, North America and Australia:

I feel very privileged to do a lot of television work and a lot of promo, ads on Instagram and stuff. I’ve made more than I’ve ever made, but I’ve also lost a lot of money! I can’t moan though. Before Drag Race, I was in my overdraft. We’re all in the same boat ain’t we, and I’m lucky enough to make large amounts of money by putting a post up.

Where can you see her now?

After sharing with the GAY TIMES her latest up-coming projects (one of which includes working with BAFTA-winning actors!) set to be released later this year, Baga Chipz can currently be seen on God Shave the Queen. The BBC-produced docu-series Ru-veals exclusive behind-the-scenes drama surrounding the first season's post production full cast tour.

Get a glimpse of her hilarious appearance on Celebrity MasterChef in the video above!