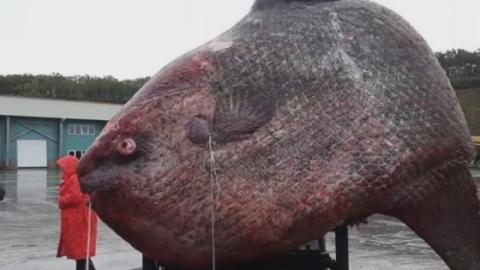 Do you want chips with that? A sea monster was caught in Russia weighing more than a tonne! What a historical catch!

An extraordinary and spectacular catch. In Russia, a fisherman caught an enormous moonfish and the images are just incredible.

According to The Sun, Russian fisherman caught the biggest fish that has ever been caught; a moonfish weighing 1.2 tonnes. What an incredible catch!

This sea monster was caught just off the coast of one of the Kuril Islands, in the Sea of Okhotsk. Even if for some people, this moonfish is just an enormous sea beast, scientists have said it should have been preserved and donated to a museum. But alas, the fisherman left it out to rot.

Local scientists were quite disappointed by the fact that the specimen was not entrusted to them when it was caught.

Instead, the sea giant was left out in the sun and its remains were eaten by birds and then given to grizzly bears after it had gone off. Though becoming popular as food in Asia, selling the moonfish’ meat is completely banned in Europe.