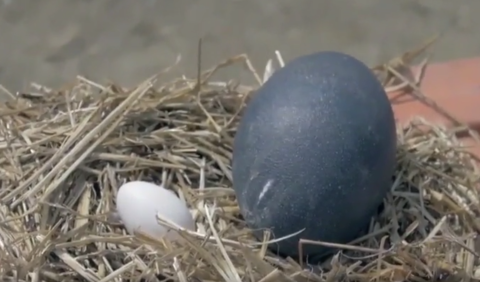 Charlotte Harrison decided to buy an emu egg on eBay. After looking after it as if it was her own child, it hatched right in her hands.

Charlotte decided she wanted to look after an emu, which is an extremely complicated practise that requires a lot of thoroughness and care, so she bought an emu egg on eBay for 25 pounds. Thanks to tutorials she saw on the internet, this mother learned about some very specific incubation techniques for this species and managed to do it properly.

Whilst doing this, Charlotte saw her maternal instinct grow.

‘Having coaxed him through the birth, I feel so protective of Kevin. I think it’s because I nurtured him through incubation to hatching and the process has similarities to pregnancy.’

At the time, the 47 days incubation period required a lot of attention and care: the humidity, position and temperature all had to be controlled. To really do this properly, Charlotte even learned to imitate an emu’s cry in order to reassure the animal and coax him out of his shell.

Today, Charlotte is happy with what she has accomplished.

‘From the moment he was born, he was completely attached to me, he definitely thought I was his mother. Whether it was because I was the first person he saw or because he recognized the noises I’d made while he was in the egg, I don’t know,’ she admits.

Read also
Given Only Months To Live, This Abandoned Cat's Owner Did Something Incredible For The Furry Feline

She will need to keep him outside when he is bigger though since emus are the second largest bird in the world after the ostrich, measuring 1.80 metres.

If You See This On The Ground, Run Away Immediately