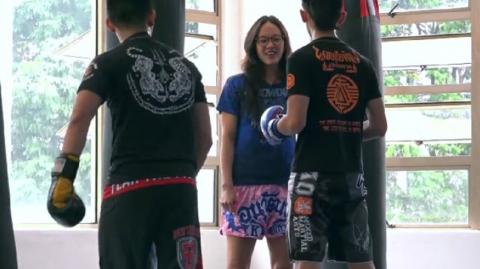 Looks can be deceiving! Some men learned that the hard way when this champion Muay Thai fighter walked into their gym pretending to be a beginner.

Sometimes men have a tendency to underestimate women's athletic abilities. One gym decided to turn this around and bring in a world-class Muay Thai fighter to show the male trainers that a woman can hit just as hard, if not harder.

In the beginning, Germaine Yeap - professional Muay Thai practitioner - pretended that this was her very first time sparring. Upon arriving at the gym, she seemed utterly lost. She didn't know how to stand, throw a punch, or even get in the ring.

Let's get ready to rumble

After convincing one man to come in and train her, they decided to get to work. The man quickly started tossing her around and landing punches. After a bit of abuse, Yeap decided enough was enough - it's time to get down to business.

As you can see by the video, the rest is history. She laid down a serious beating on her sparring partners. In the end, she revealed the prank and they all had a good laugh. Fair play to all of them!

#girl power
Contact
To ensure that we can best respond to your question, please choose your desired department
No connection
Check your settings