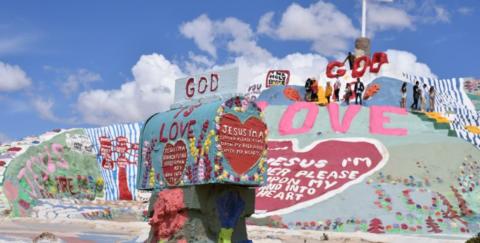 In the United States there is a small town for Americans in search of freedom... A city that we’ll present to you, bearing the name Slab City.

Located in the heart of the California desert, near Salton Sea, Slab City exists without any jurisdiction. Also known as the ‘Last 100% Free City in the United States,’ it has only grown over time.

Slab City owes its freedom to its residents - permanent or just passing through - coming from absolutely everywhere! Because there, everyone is welcome! However, do not expect many comforts.

The price of freedom

Indeed, even if in this city there are no taxes and no administration, that means there is no running water nor utilities, and electricity is produced by small solar panels placed on makeshift caravans.

A former U.S. Navy military base, this camp, formerly known as Camp Dunlap, was abandoned shortly after the Second World War and has been inhabited ever since.

Also know that if you want to live in Slab City, you will have to learn to tolerate 45°C... A very high temperature that allows the ‘locals’ to grow their own fruits and vegetables!

It owes the name Slab City to the iron bars that are still erected here and there. If you want to meet new people and have a very different experience, this city is the place for you!

#travel
Contact
To ensure that we can best respond to your question, please choose your desired department
No connection
Check your settings