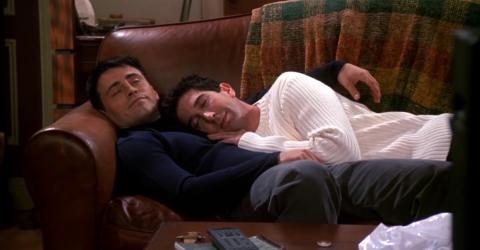 The hit sitcom, Friends, encompasses an array of superpowers: the popular television programme can induce neverending laughter (no matter how many times you’ve watched it), ignite nostalgia, and lullaby viewers to sleep.

25 years ago, Friends introduced us to Chandler, Monica, Rachel, Phoebe, Joey, and Ross. Viewers across the globe couldn’t help butfall in love with the six friends. Fast forward to 2019, and viewers are now watching the show for laughs, but they also use the comedy as a sleep aid.

What makes Friends the ideal sleep-inducing nighttime routine? Media psychologist, Elizabeth Cohen weighs in on the current calming bedtime formula sweeping the globe: “Viewers don't even have to put in any cognitive effort to identify the jokes.”

Cohen reveals that watching the same show over and over can help to ease minds. It doesn’t require a lot of brainpower to watch reruns of your favourite show.

She explains that the formulaic cadence presented in sitcoms helps to calm viewers. But what makes Friendsstand-out? Why aren’t more people watching Seinfeld or New Girl?

The media psychologist shares why more viewers opt to watch Friends as a sleep aid rather than tune into other popular sitcoms. What’s the reason? Tune into our video to find out!