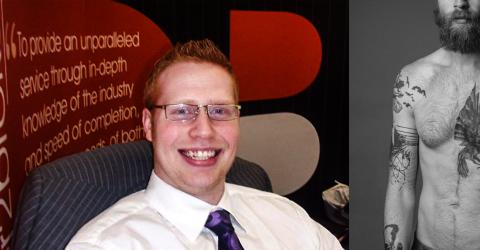 There are some physical transformations that are so spectacular that they almost seem unreal. And yet, this British man managed to overcome his self-consciousness, his complexes and his excess weight and is now a model that everyone is going crazy about.

After spending a good part of his life being unhappy with how he looked, one day, Gwilym C Pugh decided to take matters into his own hands and radically change his life.

A former insurance salesman who felt uncomfortable in his own skin, this thirty-year-old from Wales decided to give up everything to achieve his dreams. After quitting his boring job that he wasn’t happy with, Gwilym then dedicated 5 years of his life to completely changing himself which ended up opening many doors for him and helped him find success.

As well as going to the gym and changing his diet, this young man did everything he could to succeed in his transformation. Acting on the advice of a barber friend, Gwilym even let himself grow a superb red beard that proved to be a key part of his success.

‘At that time, I was pretty overweight, working 12 hours a day, plagued with injuries which meant I couldn’t train at all. The business was doing okay, but I decided I needed to get my life in order and wanted to get healthy again,’ revealed the 33-year-old who is now very in demand in the world of fashion.

After signing his first contract for the Red Hot 100 calendar, it didn’t take Gwilym C Pugh very long to be picked up by the prestigious London agency AMCK Models. He has since worked for Diesel, Vans, GQ magazine and even David Beckham who chose this beautiful man who looks like a Viking to represent his cosmetics brand House99.

The model also has an Instagram account which nowadays has more than 240,000 followers who use it as inspiration on how to succeed in their own goals.

Woman's Fiance Leaves Her After Her Dramatic 14 stone Weight Loss

Desperate To Have Children, This Bride Lost Half Her Body Weight In Order To Conceive