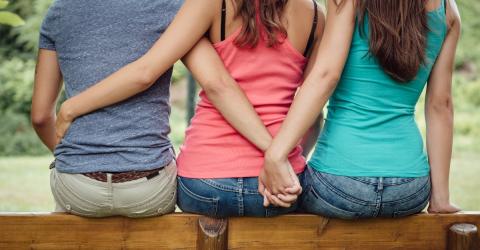 A come-hither look, a long conversation with someone you don’t know, sending nudes, thinking about someone else… Everyone has their limits and what they class as cheating. How far can you go before you reach this limit? A dating site carried out a survey to find out.

Everyone has their own definition of cheating. For some people, it starts when you think about another person or even when you’re merely attracted to someone who isn’t your partner. Other people are even ready to leave their other half if they see them talking to someone else. But what do the majority of people in relationships think?

How far can you go before you’re being unfaithful? That’s what Ashley Madison, a sort of dating site for married people, wanted to find out.

Clients on the website were asked to take part in a survey so they could find out what they considered acts, gestures, words or even thoughts that would be classed as cheating (besides having a sexual relationship with someone else of course).

Among the people involved in this survey, 55% responded that a strong emotional bond with someone else is already classed as being unfaithful. Lots of users on the Ashley Madison site think that having feelings for someone else that are reciprocated is more serious than a bout of meaningless sex.

The second most common thing that was mentioned in the survey was sending naked photos to someone else (the beginning of a dangerous game).

29% of people think that keeping dating apps on their phone can be dangerous for the relationship. 16% think that being in contact with an ex is a type of cheating.

14% add that merely fantasising about someone else is cheating! The important thing is to have the conversation with your partner to be sure that they have the same limits and think the same things as you do to avoid trouble.

Take a look at the video above for more on what people think counts as cheating!

3 Reasons To Get Between The Sheets Backed By Science!

#relationships
Contact
To ensure that we can best respond to your question, please choose your desired department
No connection
Check your settings