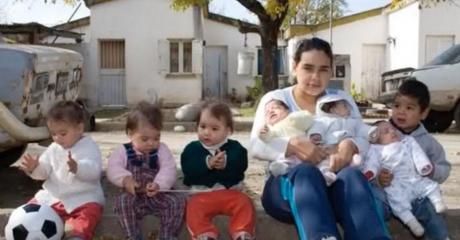 Teen pregnancies are more and more common in countries in South America, but this case will leave you speechless. Find out more about Pamela’s story and check out the video above.

Pamela Villaruel, a local in Leones, Argentina was just 13 years old when she got pregnant for the first time. This Argentinian teen is just one example of lots of cases that occur throughout all of Latin America. Four years later, she had 7 babies to 3 different fathers. From her first relationship, the father did not take any responsibility for being the father and Pamela was forced to bring up her child with her mother and her grandparents who helped out.

One year after her first relationship, Pamela found herself pregnant again. But this time, her surprise was even greater. She was having 3 babies! At just 15 years old and already with 4 children, the children’s fathers still refused to acknowledge them as their own.

In her third relationship two years later, the teen fell pregnant for a third time. And surprise surprise: she was having triplets again! And once again, the father didn’t want anything to do with them. Her family now had 7 babies to look after.

A story that sheds light on a larger problem

Its been over ten years since she had her first child and at the time, her story was very well known. Lots of people called for the government to sentence the fathers of these children for paedophilia or at least to make them help the family any way they could. After she gave birth to her seventh child, Pamela’s mother asked the authorities to help them financially by giving her daughter a tubal litigation, or better known as having her tubes tied.

The petition was denied since the procedure couldn’t be carried out on people who are underage, and Pamela was just 17 at the time. A decade later and we have no news about Pamela and her children.

Teen pregnancies and absent fathers: more common than you might think

As much in Argentina as in other countries in South America, cases like this are quite common. According to a joint report published on 28th March by the Organización Panamericana de la Salud (The Pan American Health Organization/WHO), UNICEF and the United Nations Population Fund (UNFPA), among countries in South America, Argentina is in the fifth position for the highest number of teen pregnancies each year. In each group of a thousand girls aged between 15 and 19, 64 fall pregnant every year. The report puts Venezuela in first place with 80 teen pregnancies every year and in front of Argentina is Ecuador with 77 pregnancies a year, Bolivia with 72 and Brazil with 68.

Another more worrying figure is the number of babies that are registered without a father’s name on the birth certificate: 5.5 million.

‘It’s a terrifying number which indicates social irresponsibility. For example, in Sao Paulo alone there are around 700 thousand children without a father listed on their birth certificate,’ said Álvaro Villaça Azevedo, professor of Civil Rights at the Law school at the University of Sao Paulo (USP) and director of the law school at the Armando Alvares Penteado Foundation (FAAP).

#pregnancy
Contact
To ensure that we can best respond to your question, please choose your desired department
No connection
Check your settings