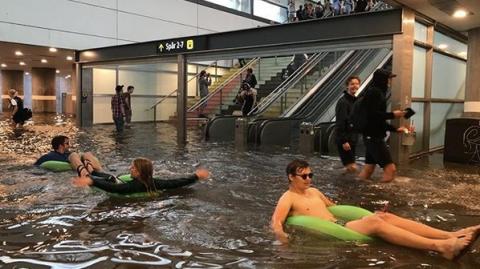 The heavy rainfall that hit the city of Uppsala, Sweden, gave the inhabitants some pretty crazy ideas.

In Uppsala, 43 miles north of Stockholm, Sweden, heavy rainfalls have caused flooding. But for some inhabitants, there was no question of staying locked indoors. The bravest decided to go to the flooded train station in the city and turned it into a giant pool!

The building's lobby was covered with several inches of water and the outside temperature was hovering around 33 degrees (a record there), so residents decided to take it easy in this incredible location, accompanied by several inflatable rafts.

The fun and relaxation clearly being had by all amused passersby, who did not hesitate to photograph the scene. The photographs and videos of this Uppsala train station pool can be found all over social media, where they have been a real hit!

#viral#weird
Contact
To ensure that we can best respond to your question, please choose your desired department
No connection
Check your settings