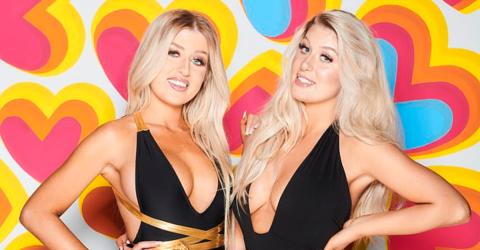 With the Winter Love Island 2020 cast finally being revealed this week, it has been confirmed that 20-year-old twins Eve and Jess Gale are headed into the villa. The blonde bombshell pair are sure to make waves – but recently uncovered photos show them looking unrecognisable not that long ago…

Winter Love Island is almost here and two of the most talked-about contestants so far are identical 20-year-old twins Eve and Jess Gale. The girls hail from Cambridge but have most recently been living in London whilst studying at UCL and working as waitresses in VIP nightclub Embargo Republica in Chelsea.

The twins may have been pictured as blonde bombshells in their Love Island promo pics but it turns out they’re actually natural redheads! In uncovered photos from Eve and Jess’ schooldays at Cottenham Village College, they can be seen with their natural glossy red hair and without their fake tans.

Will the twins count as one contestant or two?

ITV have confirmed that Eve and Jess will be counted as separate contestants on the show, despite the fact they’ve posted shared interviews and promo pics prior to going on. Whilst this makes sense (we’d hardly expect them to get in a throuple!) it could cause serious drama if one of them is voted off the island before the other.

Although the Gale twins have vowed never to fall out over a boy, they could be in line for some stiff competition in the villa as Eve, Jess and fellow contestant Sophie Piperhave named Anthony Joshua as their celeb crush. Could the twins clash with Sophie if an AJ-lookalike comes into the villa?

Whilst Eve and Jess have been touted as Love Island’s first-ever twins, many fans have been quick to point out that this isn’t the case as Italian twins John and Tony Alberti also had a short-lived stint on Love Island series one way back in 2015 – although they only managed a disappointing three days in the villa.

Check out the video above to see how much Eve and Jess have changed!

Fears For Love Island Villa As Security Boss Is Shot