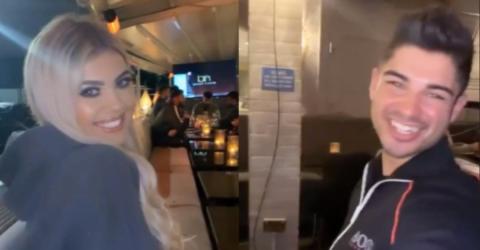 After splitting up just weeks after leaving the villa, it looks like Love Island favourites Anton Danyluk and Belle Hassan might be rekindling their romance after all – as some pretty persuasive photo evidence has got fans convinced that they’re back together!

Sadly, we all know that Love Island romances aren’t always made to last. After Jack Fincham and Dani Dyer all made us believe in true love in the summer of 2018, they brutally trampled on all our hopes and dreams when they announced their shock split (twice) just months later. Now, no 2018 Love Island couples have been together for months – and it looks like the stars of 2019 could be going the same way.

Officially, only Tommy and Molly-Mae, Curtis and Maura and India and Ovie are still going strong from this year’s series – but it looks like this could be the year of the rebound. We’ve already seen Joe Garratt (the Sandwich Man) rekindle his romance with surfer chick Lucie Donlan, months after his premature exit from the villa.

Now, it looks like Anton Danyluk and Belle Hassan – who left the villa happily coupled up but split in early September when Belle got fed up of Anton’s wild partying – could be getting back together again too. Belle has admitted that she still speaks to the Scottish hunk every day and Anton said ‘There will always be something there between me and Belle.’

At the time of their split, Belle had already refused to rule out a reunion with Anton, telling The Sun: ‘I have so much love and respect for Anton. He's helped change my life and we've gone through so much together. Maybe when our schedules die down there will be something there. You never know. Everything's such a whirlwind. We said let's wait and see what happens in a couple of months. I will never say never, because when people do and then they get back with them they always look like a knob.’

Now, just a week after they were spotted smooching in a video taken by fellow Islander Lucie Donlan, Anton and Belle have been pictured dining out together and looking very cosy indeed. Could the exes be just really, REALLY good friends, or is there something more going on? Check out the video above to judge for yourself!