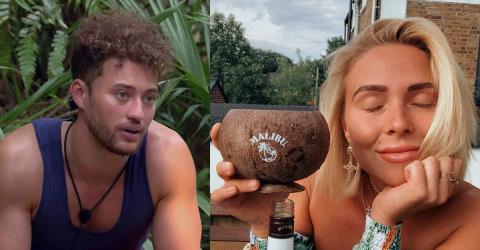 Love Island star Gabby Allen may not have entered the I’m A Celeb jungle this year – but that hasn’t stopped her from making waves from the outside. Following campmate Myles’ fresh claims about her alleged ‘affair’ with Dan Osborne, Gabby has taken drastic measures to set the record straight…

It’s been a dramatic series of I’m A Celebrity… Get Me Out Of Here! so far but it seems like much of the drama has been going down off-screen. Last week,it was reported that Jacqueline Jossa had been briefly allowed to leave the camp to phone husband Dan Osborne after Myles Stephenson claimed he believed he had been unfaithful to her with his ex Gabby Allen.

Jacqueline’s marriage to Dan broke down for several months last year after reports that he had cheated on her with Gabby. They reunited shortly after Jac gave birth to their second daughter, Mia. Whilst Dan and Gabby deny anything happened between them, Myles – who dated Gabby for almost a year – seems to think otherwise.

Furious at the rumours being brought back into the spotlight, Gabby took to her Instagram story to publically out Myles’ own bad behaviour in their relationship by sharing screenshots that prove he was unfaithful to her – accusing him of making the claims about her and Dan in order to deflect from his own behaviour.

She wrote: ‘I just want to reiterate/ set the record straight. I have tried to bite my tongue and keep my dignity after discovering the new endless determined pursuit of women and a long term affair that Myles undertook. I wanted to deal with this break up privately but I have been left with no choice after deflective behaviour and my name being questioned. So, will stand up for myself but I'm not going to talk about this again after today. Thanks to all the girls who came forward and sent me details of Myles' cheating.’