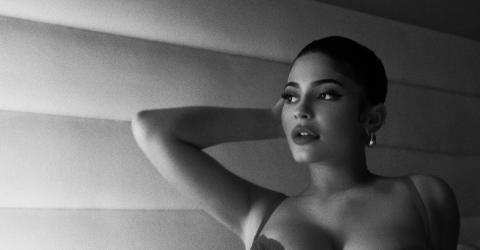 After their shocking break up earlier this year, Kylie Jenner and Travis Scott always claimed to remain friends for the sake of their daughter Stormi. The pair is reportedly very close, and have spent Christmas together, with their daughter. But It seems like Scott still hold grudges after all

The youngest of the Kardashian-Jenner Klan has always blessed her fans with pictures of herself with varying degrees of clothing on, but this time her photos may have upset her baby's father, Astro Wolrd rapper Travis Scott.

The entrepreneur behind Kylie's Cosmetics posted steamy pictures of her in bed, while only wearing only lingerie with the caption: 'just didn’t feel right going into 2020 without one last thirst trap.'

The black and white snaps are not any more revealing than we've seen before. Last September, Kim Kardashian's sister posed for Playboy magazine... alongside ex-beau Travis Scott. The cover of the magazine a photograph by her baby daddy, a close-up and personal image of Kylie in underwear.

I love her mommy and I always will.

Earlier this month Travis did an interview with XXL magazine where he revealed that 'being a dad is better than what I thought it would be', and he also confessed his adoration for his ex-girlfriend.

Travis Scott, 22, added, 'The hard part about relationships is just trying to be in one without a million outside voices interfering.'

Despite rumours of her dating Drake, Scott and Jenner have stayed close and are very committed to co-parenting their daughter, Stormi.

Take a look at the video above to see his shady snap.

How Many Times A Month Are Couples 'Getting Busy'?