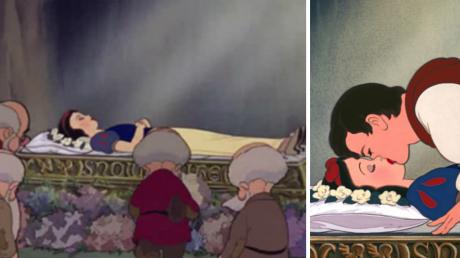 For years, the world of Disney films has fascinated children and adults alike. Some fans are even going to the lengths of watching the entire films in slow motion in order to find small clues and coming up with theories no one has ever thought about before.

Aladdin, the prince of thieves and time traveller

According to one theory, the film Aladdin takes place in the future. A theory that has come to light thanks to the character of Genie, who continuously makes references to people and everyday objects from the 20th century throughout the film.

Here are some examples: the actor Arnold Schwarzenegger is mentioned but we also hear the names of boxers; there are transformations into air hostesses, as well as light bulbs. He even at one point uses a microphone.

The explanation: Genie comes from the 20th century before he was imprisoned in his lamp and resurfaces hundreds of years later, thanks to Aladdin. Thus, the film doesn’t take place in the past, but… in the future!

Snow White and the Seven Dwarves or the Sad Ending theory

We all know the ending of Snow White and the Seven Dwarves, when Prince Charming has just kissed the brunette on her pale forehead after she’s taken a bite of the apple… thus bringing her back to life.

Surely not! In reality, Snow White would only be an allegory of death. In addition, this famous princely kiss would represent the metaphorical kiss of Death come in search for her soul.

We can already imagine you disgust at reading those lines, but look closely at the moment when she parts from the Seven Dwarves: she doesn’t look at them once! What a scoundrel!

But if you want to go even further, look closely at the castle when Prince Charming is leading Snow White on her beautiful white horse. The décor looks like paradise… in fact, we rarely see floating castles in the sky; the exception is Hayao Miyazaki’s animated cartoon, ‘A Castle in the Sky’, but at least in that case the title is clear!

Check out the video above for yet more insane Disney fan theories!