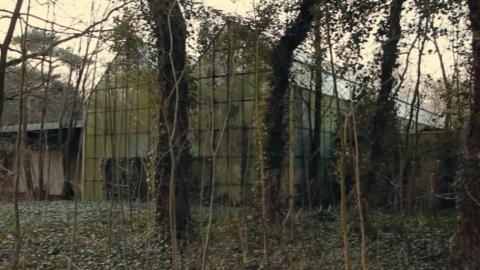 When they made a night-time visit to the abandoned zoo in Wassenaar in the Netherlands, three members of the YouTube channel Stuk TV were shocked to discover that there was one inhabitant still living there...

It's certainly a night they'll remember for the rest of their lives. In the middle of the night, three members of YouTube channel Stuk TV snuck into the old zoo at Wassenaar in the Netherlands. What they weren't expecting to find was that there was still one animal resident left.

The animal was a spider monkey. The monkey had lived in the animal park for decades, from years before the park closed its doors in 1985. At the time, a disagreement between Groupe Louwman, the owner, and the local authority led to the zoo, which held over 40 different species of animal, closing down.

All of the animals were transferred to other zoos except the primate in question and one other spider monkey. Due to a lack of places elsewhere the two monkeys were left to roam in the abandoned park. Worried, the YouTubers contacted the people responsible for the land and were assured that they had kept an eye on the monkeys for all these years and that they had lived a long and happy existence there. The older of the two had died in 2014, at the age of 60. From then on, the remaining monkey, aged 56, had led a solitary life.

However, it was possible that the YouTubers' visit could change everything. They were completely stunned by their scoop. After they had shared their story, animal welfare organizations were contacted. One of them, Stichting Aap, was particularly worried for the animal's well-being. In an interview with the Dutch newspaper Algemeen Dagblad, a spokesperson said 'If the monkey is alone, this is no longer a desirable situation'.

The representative nonetheless remained cautious over the measures which ought to be taken: 'We must see if the animal can be accommodated somewhere. He is of advanced age and it is not certain that he will be able to cope with a move. All of these factors will be taken into consideration'.

The owners of the abandoned zoo said that they regret the renewed interest in the park, 'This unnecessary stress is endangering the monkey's well-being', explained one of them. The spokesperson also highlighted the fact that the monkeys had already lived exceptionally long lives. The spider monkey's usual life expectancy is around 33 years!

Check out the video above to see more for yourself...

#animal#monkey
Contact
To ensure that we can best respond to your question, please choose your desired department
No connection
Check your settings