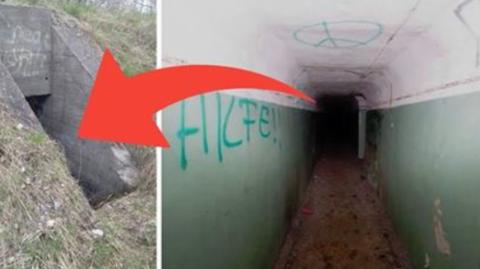 In 2013, two young boys discovered a building full of secrets, which was situated in the depths of a German forest, in the former GDR.

Armed with their cameras and torches, they went exploring inside a former German bunker which they found on a walk through the forest. Two strange tubes sticking out of the ground attracted their attention, and about 350 feet away, they discovered an entrance covered by overgrowth.

Inside, they found themselves confronted by endless corridors leading into different directions, with a very dark ambience.

The moisture and mould were everywhere, which explained the putrid smell present in the whole building.

The two explorers found many abandoned objects such as shoes and gloves, which suggests that the place was abandoned in a great rush.

Graffiti was also discovered inside, terrifying words which suggest the terrifying state of mind of those who occupied this place: ‘HILFE!' ('Help') and ‘Hello Satan, I love you’ were written on the walls in German. Several of the reinforced doors also had Russian inscriptions, allusions to the Cold War made during the Russian occupation.

One thing is certain: this mysterious place has not yet revealed all its secrets.

Check out the video to see the bone chilling images!

#history
Contact
To ensure that we can best respond to your question, please choose your desired department
No connection
Check your settings