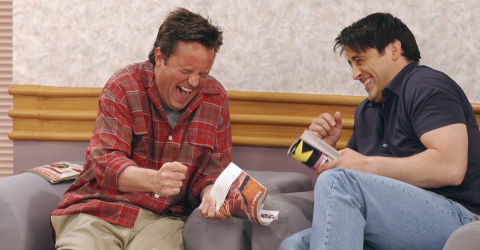 Devoted Friends fans have watched the show over and over again, which means that more and more fans have found filming-related and prop blunders throughout the series. This time they found not one, but two mistakes within a 20-second frame! Check out the video above to see them for yourself - but be warned, once you've seen them, you'll never be able to unsee them!

What happens when you pair a TV show that stopped airing 15 years ago with fans who have watched the show in its entirety several times? You get an array of never-spotted-before production-related mistakes!

However, it turns out that one 20-second clip in ‘The One with Ross's Inappropriate Song', an episode in season nine, shows two small mistakes.

Do you remember when Joey and Chandler find a suspicious tape in Richard’s apartment titled, ‘Monica’? You probably do! Anyways, when they put the tape into the VCR, Chandler is relieved to find out that it’s only football, so he starts to walk away to grab a beer. All of a sudden, noises of Monica and Richard getting hot and heavy fill the room, and Joey reacts by knocking Chandler to the ground so he can't see his partner with her ex.

Between the time where Chandler sees that it’s only football to when Joey tackles him, you can spot two mistakes!

Want to know what they are? Watch the video above to find out!