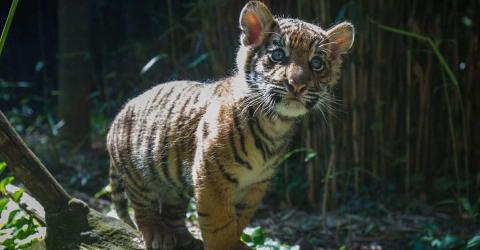 After a traumatic start to life, a 9-week-old Sumatran tiger cub is on his way to a new life in California.

The baby tiger was born at the National Zoo in Washington D.C., USA. However, his mother Damai rejected him from birth. She was often aggressive towards him, barking, and biting on several occasions. She also wasn't producing enough milk so zookeepers had to supplement his dietwith kitten milk and additives.

Experts are not sure why Damai didn't bond with her cub but they have some theories. It is possible that Damai didn't produce enough milk because she had only given birth to a single cub. As zookeepers intervened in the feeding early on in the cub's life this may have created further distance between the mother and her cub.

It is also possible that Damai was unwell during the first weeks of her cub's life and missed the bonding that should have taken place.

Whatever the reason, Damai had clearly rejected her cub and it was up to the zoo to find him a new place to live. By a lucky coincidence, the San Diego Zoo in California had recently acquired another tiger cub which had been discovered by police border between the US and Mexico. They offered to take on Damai's cub too so that this little one would have a companion.

Whilst staff at the National Zoo were very sad to see the little cub they had nurtured and grown attached to leave, they were excited that he would have this great opportunity at a new life. All the best to the two little tiger cubs as they start their journey through life together at San Diego Zoo!

Check out the video above to see the adorable cub for yourself!