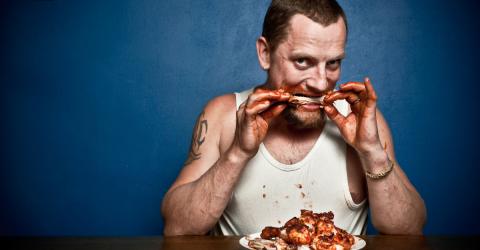 A study found that men eat more food when they’re around women. Here's why.

Researchers at Cornell University wanted to study how much food we eat when we're around people of the opposite sex. They conducted their study in an Italian restaurant on a hundred participants aged between 18 and 81 years old. The surprising result of their study: men eat more in the presence of women.

Why do men eat more around women?

93% more pizza, 86% more salad... Men eat a lot more when they're around women. But why? According to the researchers, they might be doing it to impress them. Eating larger amounts of food would be a sign of the man's good health, suggesting that he's able to eat as much as he wants and stay healthy anyway.

There is a link between eating disorders in women and the societal pressure that glorifies thinness, not to mention diets that can sometimes cause women to become anorexic. According to this study, published in the journal Evolutionary Psychological Science, women don't eat more or less than usual around men. The researchers believe that this could be due to the non-romantic nature of the experiment... but that remains to be proven. It's also worth noting that the study was conducted at a restaurant that offers all-you-can-eat pizza and salads at no extra charge, which might also explain the men's overeating. You can't say no to free food!