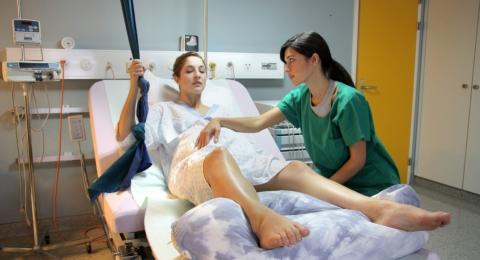 In April 2017, after having had a hysterectomy, Sylvie began to feel severe pain in her abdomen. The patient quickly understood what it was because three days later, she gave birth to a glove and compresses. She realized then that the doctor in charge of the procedure had forgotten them after the surgery.

On April 6th, a woman named Sylvie received a hysterectomy, removal of the uterus, in Marseille. After the surgery, the 48-year-old patient woke up with severe pain. Sylvie could not urinate anymore.

The surgeon in charge of the procedure allegedly didn't take his patient's complaints seriously. He refused to examine her while she was still in the hospital. "He told me that I was soft and gave me nothing but painkillers," said Sylvie to 20 Minutes. She finally left the hospital without receiving any auscultation or ultrasound.

"A glove and compresses came out in a pool of blood"

Back home, Sylvie was forced to stay in bed because of her pain. Three days after the procedure, she began to feel contractions. That's when she "gave birth" to items that had been used during the surgery: "I was still in pain, I went to the toilet and there, a glove and compresses came out in a pool of blood. It was really like giving birth."

When he returned to the clinic, the doctor did not seem worried at all. "The surgeon arrived as if nothing had happened, as if he were coming over for a drink. He blamed the nurses and hurriedly disposed of the glove and compresses. Luckily, my husband had taken a picture of them," Sylvie explained to 20 minutes.

The patient then tried to hold him accountable, but the doctor simply said, "If you're not happy, just take it up with my insurance company, I am very well insured."

Patrice Humbert, the patient's lawyer, later found out that the doctor was in charge of examining her post-surgery. Either way, the medical examination will not go in his favor. "No account of compresses was done after surgery when the surgeon had a security checklist to avoid this serious mistake," said Patrice Humbert.

The District Court of Marseille, seized by Sylvie, has urgently instructed an expert to assess the surgeon's errors and damages. "I hope he will be punished and he will never be able to repeat what he did to me," says Sylvie. Since her traumatic surgery, she had been seeing a psychiatrist and has taken six months' leave.

Check out the video above for more on this unbelievable story...

#health#baby
Contact
To ensure that we can best respond to your question, please choose your desired department
No connection
Check your settings