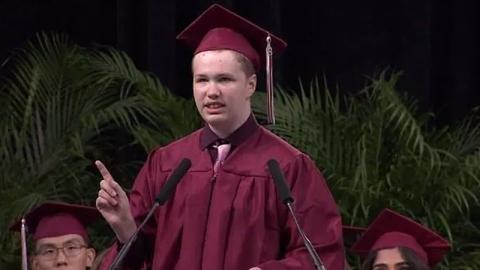 Sef Scott has autism and is usually non-verbal so his classmates were amazed when he stood up to make this 'unexpected' speech.

Speaking in front of a crowd of people is difficult for most people so the fact that Sef Scott, who has autism and usually doesn't speak at all, was able to get up and deliver such a powerful speech is truly impressive.

In the speech, Sef addresses the surprise he imagines that his classmates will be feeling at seeing him giving a speech. He credits his mum and his brother for helping him prepare the speech and encourages his classmates to push themselves to do the unexpected.