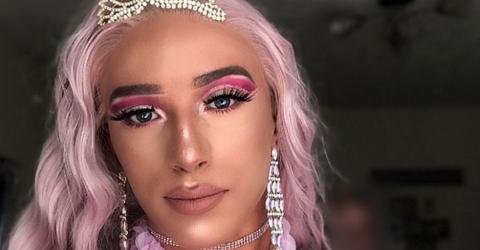 Young Daniel Allen came out at age 13 and was bullied by his schoolmates. This year, Daniel Allen got revenge at Prom, by showing up as a drag queen and stealing the spotlight from all his little classmates...

Daniel Allen will never forget his prom at Fernwood School, in the city of Nottingham. This young, British model got revenge by proving to everyone who criticized his look that he doesn't care what they think. He showed up in drag and was the star of the party.

Since he was a toddler, Daniel Allen says that he has endured bullying because he was "too different". At age 13, he bravely came out. He told the Daily Mail that this happened a few days before he started wearing makeup.

A clothing choice that has unfortunately fueled some of his tormentors' rage. Some have even encouraged him to commit suicide. Daniel is grateful to the school, which has always supported him in the face of all this violence.

He explains that he likes to wear both women's and men's clothing. And that his choice mainly depends on his mood!

Daniel Allen's mother, Amanda, realized as soon as he turned 2 years old that he liked to dress like both a man and a woman. She has supported her son from the start.

But Amanda is sad that society is so violent and unsympathetic towards individuals who are perceived as different. "These poor children - and adults - can't yet express themselves freely. But the more colours there are in the world, the more beautiful it is."

#empowerment
Contact
To ensure that we can best respond to your question, please choose your desired department
No connection
Check your settings