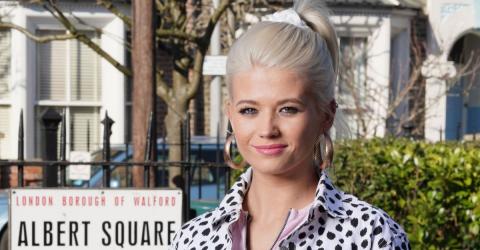 Fiery single mum and part-time beautician Lola Pearce returned to Albert Square in April and she's been making waves ever since. But fans have been shocked by how different 26-year-old actress Danielle Harold really looks to her on-screen alter-ego...

We see soap actors so often on our screens that we often start thinking of them as real people and it can be hard to remember that they're only characters! This means it can be a shock when we see how different soap actors really look when they're not acting.

26-year-old Danielle Harold is an example of one soap star who looks totally different from her character. Spotted this week in Elstree, where Eastenders is filmed, Danielle oozed Hollywood glam as she rocked a designer outfit featuring a stylish LBD, Ray-Bans and a Gucci belt - worlds away from Lola's brightly-coloured tracksuits and Puffa jackets.

Danielle has been back on our screens as Lola since April - after a four-year hiatus from the soap. After several appearances in low-budget horror films, the actress admitted that she was excited to be back on Eastenders, although she admitted that it felt different from her first stint.

'I was 17 when I started on EastEnders and I feel like I have grown up a lot. It is a crazy thing to be a part of the show so young. When you are younger you go out a lot more, but I don’t do the clubbing scene now. I sound like I am 60 but I’m only 26. I feel old.'

Danielle's character Lola has had a rocky ride since returning to Walford, as she's been forced to keep schtum about Ben's mysterious plans with his family. She's also faced heartbreak watching old flame Jay Brown with Ruby Allen - although now that they've split it seems she could be back in with a chance...

Check out the video above to see how different Danielle really looks from her on-screen persona!

#celeb#tv
Contact
To ensure that we can best respond to your question, please choose your desired department
No connection
Check your settings