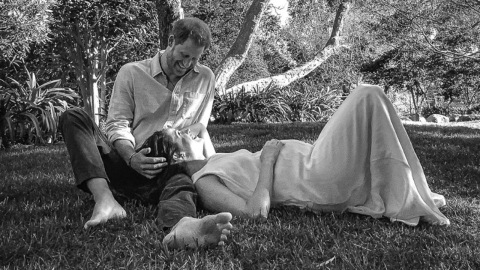 On Sunday, the Sussexes announced that they were expecting their second child. Here's all you need to know about the new royal baby...

Yesterday Prince Harry and Meghan Markle revealed to the world that they are happily expecting their second child. A statement on social media read:

The Duke and Duchess of Sussex are expecting their second child!🖤

The announcement was accompanied by a black and white photo of the couple, with Harry resting his hand on Meghan’s head as she lies on him, cradling her baby bump. The image was taken by family friend and photographer, Missan Harriman who added:

Meg, I was there at your wedding to witness this love story begin, and my friend, I am honoured to capture it grow. Congratulations to The Duke and Duchess of Sussex on this joyous news!

The happy news was revealed just months after the Duchess opened up about experiencing a miscarriage. In an article for the New York Times the Duchess revealed:

I knew, as I clutched my firstborn child, that I was losing my second.

The Buckingham Palace also gave their praises to the Sussexes, releasing in a statement that the ‘entire family’ was delighted and wished the couple well.

A loving tribute to Princess Diana

Harry and Meghan’s announcement has also been noted to be a loving nod to Harry’s late mother Princess Diana, who announced to the world exactly 37 years earlier that she was pregnant with Harry.

Where will the new baby be in the line of succession?

Archie’s new sibling is expected to be born in the USA and will the most senior royal to be born outside of the UK. However, the new Sussex baby will still be entitled to a place in the line of succession. The Queen’s 10th great-grandchild will be eighth in line to the throne, just behind their dad and brother Archie.

The future line of succession:

The new Sussex baby will also still be allowed a title such as Lord or Lady, however, it is much more likely that the baby will be born as Master or Miss Mountbatten-Windsor. When the Prince of Wales takes the throne, Baby Sussex will most likely be allowed an HRH title, but it is unlikely that Harry and Meghan will opt for such a change.

The Duke and Duchess made a similar decision when announcing Master Archie Mountbatten-Windsor. Their son could have been passed down the title of Earl of Dumbarton (one of Harry’s subsidiary titles), or even been named Lord Archie. Instead, Archie’s title was inspired by Prince Harry’s childhood wish to just be a normal kid.

Could this the last Sussex baby?

In a conversation with environmentalist Jane Goodall back in 2019, Harry let it slip that he wouldn’t want more than two children due to the possible environmental impacts. He revealed:

I think, weirdly, because of the people that I’ve met and the places that I’ve been fortunate enough to go to, I’ve always had a connection and a love for nature. I view it differently now, without question. I’ve always wanted to try and ensure that, even before having a child and hoping to have children...

Goodall jumped in saying she hoped that the parents would have ‘not too many kids’, to which Harry responded: ‘Two, maximum!’ He continued:

But I’ve always thought: this place is borrowed. And, surely, being as intelligent as we all are, or as evolved as we all are supposed to be, we should be able to leave something better behind for the next generation.